A couple of days ago I posted a link to Rachel Held Evans’ “15 Reasons I Left Church” on my Facebook wall, along with this comment:

While we may not agree with all of Rachel Held Evans’ reasons, or her conclusion, those of us who are church leaders should be aware that Rachel is not alone – there are undoubtedly people sitting in our pews thinking the same things.

To lay my cards on the table: I resonate with 7 or 8 of the 15 reasons that Rachel lists at my current church, and have been there with another couple of them at previous churches. On a few of the items I disagree with her doctrinally, and the frustrations I’ve had over some of these issues haven’t driven me to leave my church… but that may be because I’ve chosen to simply be quiet about some of the topics rather than being vocal and stirring the pot. So I was curious to see what sort of responses I’d get on FB, and I wasn’t disappointed.

The responses ran the gamut that I sort of expected; a couple friends identified with it quite strongly; a couple more felt the pain and frustration in her post but materially disagreed with most of the content or with how she said it; one graciously said that she “didn’t get it at all”, but that it was unhelpful whining. A college acquaintance reposted the link and got several responses from other college folks universally accusing Evans of whining and “making it all about her rather than about God”. 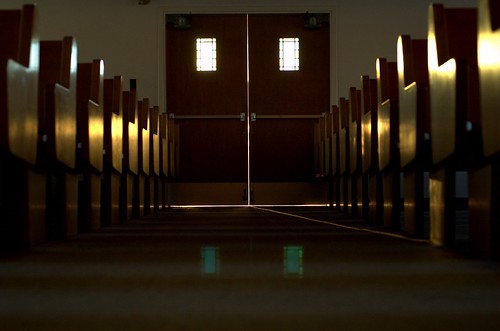 I’m not surprised by these reactions any more, but I am significantly saddened. Questioning is not sin, and wrestling with theological issues is a sign of healthy, involved, real faith, not a pointer toward apostasy. As Chaplain Mike over at InternetMonk.com so eloquently ranted a couple of weeks ago:

It is Islam that sets forth submission and unquestioning acceptance as the ultimate in piety — not Christianity nor our parent faith as expressed in the Hebrew Bible. The faith we follow is one of lively dialogue between the Creator and his creatures. We question, complain, express our anger, cry out in pain, and bargain with God. Sometimes, if you believe the Bible, God even changes his mind at our behest. Like Jacob, we refuse to let him go until he blesses us. Like Moses, we argue with God. Like the psalmists, we groan and hurl curses toward the heavens. On the other hand, preachers like [name redacted – that’s not the point] want us to get in line and behave. They rebuke our messiness, our humanness. They use the sovereignty of God to shut us up.

Maybe you wrestle with doubt and questions on a daily basis. Or maybe you’ve gone to the same church your whole life and never had the slightest inclination to doubt or argue with what is taught. Maybe you’re somewhere in between. No matter where you are on that spectrum, though, the first response has to be grace.

Grace allows us to disagree with a brother or sister but embrace them anyway. There is a time for teaching and correction, but for the hurting brother or sister, that time comes after love has been lavished and healing has begun.

Jesus didn’t rebuke the doubters; he encouraged them. Even Thomas, who after three years of following Jesus around really had more faith – even Thomas Jesus graciously called close and encouraged him to believe. The rebukes were reserved for those who thought they had it all together and were judging those who they thought didn’t. Judging by the reaction I’ve seen over the past few days, it’s time to go back and learn that lesson again.