Learning to spell a new word, or, how do you spell ‘blerg’?

It’s fascinating to see how a new word evolves, especially in the case where a word is introduced not via written text, but rather via audible means. Twenty-one years ago Homer Simpson’s “D’oh!” appeared on the cultural scene, and quickly became a part of the American lexicon. Its addition to the Oxford English Dictionary in 2000 officially marked its transition from a cartoon interjection to an accepted part of the ever-evolving English language.

With “D’oh!”, a standard written form of the word was quickly propagated by means of episode titles of The Simpsons. The past few years, though, have introduced a new interjection with much less apparent standardization. I’m talking, of course, about Tina Fey’s portrayal of the character Liz Lemon on the popular NBC sitcom 30 Rock, and her exclamation of disgust that Wikipedia appears to have settled on spelling “blerg”.

Anyone surfing the web in the past couple of years will have encountered any number of variant spellings, all apparently based around the various authors’ ideas of how it should be spelled. Google is of great help in honing in on the popular options.

Adding an ‘h’ to the end is a popular way to go – Blergh is quickly found on this budgeting website and as the name of the self-proclaimed “official boy band of the 21st century”, an Aussie group whose Facebook page, as of today, boasts 17 fans.

This comes as a bit of a surprise, given that this is the spelling that Wikipedia has settled on. The Liz Lemon page on Wikipedia provides some insight into usage: “Liz also has a tendency to say the words “blerg” and “nerds” as a replacement for swear words.”

It is apparent that the English-speaking world thinks that the /ur/ spelling is more intuitive than the /er/. Additional popularity for this spelling is evidenced by blogs named with this spelling, for instance blurg.tumblr.com and blurg.wordpress.com, and the fact that my wife uses it in all of her instant message sessions. (No major blog links showed up for the first two spellings. Grab ’em while you can!)

What is it with the added ‘h’? This hefty spelling appears to be the most popular, and has the added weight of being the spelling used by Tina Fey when she wrote about it on the 30 Rock blog.

A hint as to the fictional origin of the word can be seen in a shot from the Pilot episode of 30 Rock where this pile of unassembled Ikea-esque furniture is shown in Liz Lemon’s apartment: 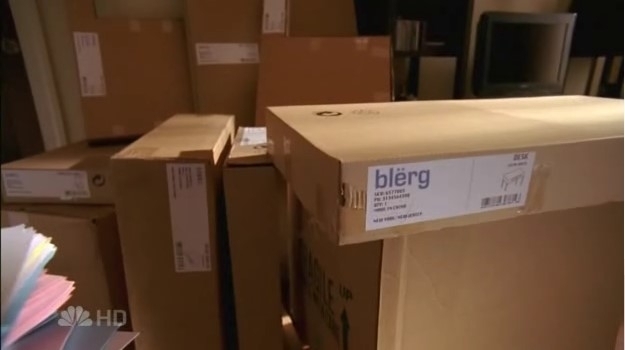 Come to think of it, I might use the name of pesky assemble-it-yourself furniture as a swear word, too, if I were coining words. Using the ë, though, makes it a little bit tough to type. As for me, I’ll stick with ‘blerg’.