Last night I had the opportunity to see Caedmon’s Call play in concert at the Five Flags Center in Dubuque, IA. It was a great time. The night started off nicely when I was able to find the venue just fine, and found free parking on the street only two parking places away from the arena. Amazing.

I walked into the arena and my first thought was that it was the worst setup for a concert that I’d ever seen. This particular arena usually is home to ice hockey and basketball. They had the stage set up against one of the long sides, and then had 40 feet of bare floor between it and the seating. And they hadn’t bothered to pull out the low bleachers, so the lowest seats were still about 12 feet off the ground. It was very weird. But the design redeemed itself when I realized that they were going to allow, nay, welcome people to stand on the floor. You could stand right up at the stage. That was pretty cool.

The opening band was a local band called Ineloquent. I’d never heard of ’em before, but they weren’t too bad. They have a husband and wife that are lead singers. He looks like one of the old contestants from The Bachelor, and sounds a bit like Dan Haseltine from Jars of Clay. His wife’s vocals reminded me just a bit of the Cardigans. Anyhow, they played a 6-song set, then the lights came back up for a 20 minute break while the stage was reconfigured.

As they got the stage set up, I talked to Andy Osenga for a quick minute as he was testing to make sure his pedal board was ready to go. He said that he was excited that they had the whole band back together for the show. Andy got his blog post written sooner than I did, so you should go read his thoughts about the show and they fun that they had. It was a blast with the whole band together. 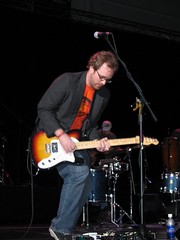 They played 13 songs, by my count, and Andy got to do a solo number in the middle. Here’s a quick rundown:

Lead of Love
They started with an oldie. The crowd down around the stage, a group of 200 or so college kids, didn’t know it. But they had fun, anyway.

Before There Was Time
This got the crowd cranking, clapping and having a good time. Nice upbeat stuff.

Walk With Me
It suprised me a little bit that they’d do this one in concert – but it’s a good song that features Danielle’s lead vocals nicely.

The Talk
Then it was time (a bit early, but ok) for the talk. This concert was a fund-raiser for a group of students from the University of Dubuque who are going to minister to the Dalits in India this summer. The cause of the Dalits is near and dear to Caedmon’s heart as well, so Cliff took several minutes to describe what they go through. This led into the next portion of the concert with songs off of the recent Share the Well album.

Diamonds on the Soles of Her Shoes
OK, so this isn’t a Caedmon’s song, but they sure enjoy doing it. Cliff pulls off a pretty nice interpretation of the Paul Simon vocal (not an easy task!), and it’s just a fun way to head into the Indian theme.

Share The Well
For this one, Garrett moves down to the front of the stage to play the tablas (small Indian drums). They weren’t mic’d very well – at least I couldn’t hear them very well, but still the song was fun. The younger crowd knew this song much better.

Bombay Rain
This was Andy’s chance to sing lead, and he did a great job as usual. It started off a little bit weak with only his guitar, but it cranked right up as they hit the first chorus, and it was all good from there.

As that song ended, it was obvious that the next song on their set list was Andy’s solo song. But Cliff called the band back to the stage to do one more India song, since the crowd was enjoying it so much. And Cliff starts out by saying “now this is a song that I really like, but I’m not sure I remember all of it.” To which Andy replies “Is it Bon Jovi?” The crowd cracked up at that, and then Josh in the background started playing a little Bon Jovi on the organ, and Andy kicked in with the guitar, and next thing you know the crowd is singing along with the chorus of Wanted Dead or Alive. It was a hoot. But the song that Cliff really wanted to sing was…

Sarala
He had to tell the story about this one first, and talked for a while. But he remembered the song, and it sounded good.

The High School Band
This was Andy’s turn to do a solo song. The rest of the band cleared the stage, and Andy stole Cliff’s acoustic guitar to play while he sang. I’ve heard Andy sing this song in concert several times now, and I think this was the best I’ve heard him sound singing it. Those high notes are tough, but he just nailed them last night. My only objection was that he always sings that song – I’ll be glad when the new album is out and he can sing something newer.

Step By Step
As the band came back out, Cliff had the crowd sing through this classic Rich Mullins tune a couple of times. Josh was playing the organ, and almost got the crowd lost a couple times with his weird harmonies, which earned him a dirty look from Cliff.

I Will Sing – Hope to Carry On
The a capella tune I Will Sing gave Andy, Cliff, and Danielle a chance to shine. They were really into it at this point, and the tight three-part harmonies were wonderful. They used that to lead right into Hope to Carry On, which probably qualifies as the oldest Caedmon’s song of all time. (Of course, it’s really a Rich Mullins song, but…) This was where the crowd really reached its emotional peak of the night. The band was cooking. Andy was ripping it on the electric guitar. He jumped off of the drum riser at the end. It was awesome.

God Of Wonders
This brought things back down a bit, but the crowd was still singing right along, and it sounded good. 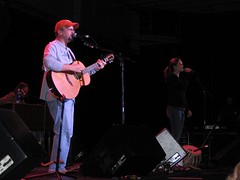 Hands of the Potter
This was a fun way to wrap up the set. Todd, Garrett, and Josh all move to the lower stage to play percussion, and the song wraps up with a long drum solo. Good times.

Dalit Hymn
They pulled this out for an encore, and again Cliff said they hadn’t done this one in a while and he hoped he remembered the whole thing. He did seem to have a bit more trouble with it – Danielle was looking at him in bewilderment a couple of times as he sang what must’ve been the wrong lyrics. But still, the crowd knew this one pretty well, and it was a good finish.

I got the chance to talk to Cliff and Andy after the show and thank them for a great evening. I suggested to Andy that we need to be able to buy t-shirts with the artwork from his new album on them… I think they’d be awesome. He said that idea, and others, were in the works, if only they could find some funds to get it kicked off.

As we were talking, Todd came out from packing stuff up with a big box of cookies that somebody had made for the band. He said they were gonna get tossed if nobody ate them, so he was out there handing them out to fans in the lobby. The peanut butter cookie I got was huge and very tasty.

My only regret from last night’s concert is that Becky wasn’t able to come. It was just impossible to find a way to take a one-month-old baby along to the concert, or to leave her home for the evening. Becky hasn’t seen Caedmon’s in concert before, and this would’ve been a great way to introduce her. Well, maybe next time.

See the rest of the concert pics on my flickr set.