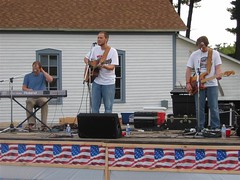 Last Saturday afternoon I got to see Andrew Peterson and Andy Osenga in concert at “Cornfest” in Clermont, IA. Clermont is a little bitty farm town, and this “Cornfest” thing was pretty much a start-up festival, I think… they had some small Christian music acts going for most of the afternoon, and then their headliner was the aforementined Andys. I’ll note here that it’s a good thing that they booked those guys – probably 70% of the folks that were there for the concert came specifically to hear Andy P.

I felt kinda bad for the Andys that the concert was not very well attended – maybe 150 people, max. They had a large flat-bed trailer for a stage and had to battle bugs all afternoon – asian beetles, bees, other nasty things. Some lady shared some bug spray with them after about the third song and I think that helped things out a bit. And yes, there was somebody riding atop a Holstein cow in the background. Only in Iowa. 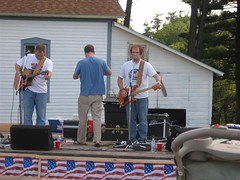 Anyhow, it was just three of them – the two Andys and then Ben Shive on keyboards. They did a two-hour set, with lots of stories and bad jokes in between. There were also impromptu versions of the Rawhide theme and an old Spin Doctors song (can’t remember the name…) I’m not familiar with Andy P’s music yet (an omission which I am hurriedly correcting) so I can’t give a song-by-song breakdown. Suffice to say that he did a few songs off of his new album, took several requests, and filled in with other favorites.

The show was marred by a few technical difficulties; Andy was complaining all afternoon that his guitar sounded funny in the monitor (it sounded fine to the audience) and so in the course of several songs they replaced the guitar cable, the direct box, the mic cable that connected the direct box to the board, and then both the 9-volt batteries in his guitar pre-amp. (Andy O had to steal 9-volts out of two of his guitar pedals to make this last fix happen.) The time required for these fixes gave time for Andy O to sing one of his songs (High School Band, so I wasn’t complaining about the other issues. 🙂 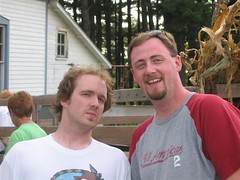 After the concert the three of them hung around and talked with folks until almost everyone had left. I was really wanting to meet Andy O (having missed him at the Caedmon’s concert last year), and was not disappointed – we talked for a while and had a good time. Ben and Andy P seemed like nice guys, too.

But the best was yet to come. There were a couple little kids who had a couple favorite Andy P songs that they wanted to hear and that he hadn’t done in concert. So, he grabbed his trusty Taylor and proceeded to take requests for another 45 minutes… just him singing and about 20 of us perched on the side of the hill listening. It was awesome. I kept thinking he was about ready to wrap up, but then he’d ask for any more requests, and somebody would ask for a song, and so he’d tell the story about the song, and then sing it… wow. After a while Ben and Andy O came and sacked out on the hill next to the rest of us, just enjoying the music and the beautiful afternoon. 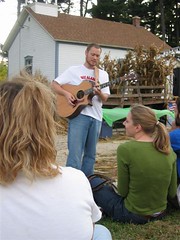 So then towards the end of that “set”, Andy P sang a goofy little song he’d written for his daughter. I don’t know what it’s called, but the chorus has a line about her “one-two-three-four-five-six-seven-eight-nine-ten pretty little toes”. About halfway through the song Andy O got up and wandered off – I think he was going to pack some gear into his car. But it was too good not to comment on, so after the song was over I asked Andy P if he’d run Andy O off, made him feel inadequate by singing a song about somebody with ten toes. (For the reader unfamiliar with Andy O’s toe situation, see his blog here.) Andy P got a good chuckle out of that, then told the story about Andy O’s run-in with the lawnmower, and mentioned that it was the middle toe, “Roast Beef”, that was missing. So then I had to mention Andy Gullahorn’s song by that name, and so we tried to come up with the lines to that song… but between Andy P, Ben, and myself, we could only come up with the first few lines. It was still pretty funny.

Let me say here just last that I was also hugely blessed by my wife that afternoon; our daughter Laura was getting tired and antsy as only toddlers can. Becky was very gracious and willing to deal with her so that I could take advantage of the chance to enjoy the concert and meet the guys. Fortunately Laura fell asleep right before the acoustic mini-set, so she got to enjoy that time.

I could ramble on for quite a while, but I’ll spare you. Let’s just say I came away from last Saturday with a good sunburn, a heightened appreciation for my wife, and a real blessing from getting to meet one man who is my favorite artist right now, and another who is quickly climbing that list.

(Full-sized photos of the afternoon are available on my flickr page here.)